The BluSnap is a unique device manufactured by Indian company BluArmor helmets that has been locally designed, developed and assembled. It functions on the same principle as that of a room cooler, providing a similar evaporative cooling effect – only this is a portable device designed to work with a full-face helmet. It attaches to your helmet via an MX-goggle style elastic strap (five different designs available) and has two chimneys that slot in behind the jaw of the helmet, directing cool air to the rider’s face. Small extensions of the strap ensure that it doesn’t scratch the helmet. Installing the device to the helmet is quick and the cooler stays quite secure upto legal speeds. We have found that it tends to move to one side on helmets with aggressively pointed jaws like ADV-stye helmets or some of AGVs sport models. By design, the BluSnap can only work with a full-face helmet.

How big is it?

The part that extends ahead of the helmet spans 12cm across, 6cm wide and 10cm tall. So the BluSnap isn’t exactly tiny, but does stay out of your line of sight. Weighing around 390g with the 60ml water reservoir filled, the device also adds a noticeable downward pull at the front of your helmet – but not to the point where it becomes a problem on the average commute. I tried wearing it as a pillion, as well, but this could be avoided, as you end up bumping into the rider’s helmet quite often due to the extra space at the front of your helmet being occupied.

How do you use it?

The BluSnap has a rubber flap on top that you remove to fill the water reservoir or access the micro-USB charging port. The water reservoir neck is quite narrow and you need to fill it slowly to avoid overflowing or to prevent air locks from forming. I find that using the water dispenser in my office is convenient – especially since BluArmor recommends using drinking water to avoid calcification over a long period, thus reducing the life of the filter. The water reservoir intake is on the left side and the charging port with a small LED battery level indicator is on the right. A full charge lasts for between 9-10hrs (good enough for the average week’s worth of commuting) and I find that the water lasts for about an hour. The device is started/stopped via a simple push button on the top right, which is fairly easy to locate with a gloved hand.

While the rubber flap feels a little fiddly to reinstall, it has been designed such, that the whole thing doesn’t need to be removed each time you need to refill the water or recharge the device. Instead, you can lift just the section above the water reservoir or charging port, as required. The flap also has an in-built extension that plugs the water reservoir shut; but you must be careful to make sure the flap is securely closed, or water will leak out of the top if the helmet isn’t held upright. I tend to hold my helmet by the jaw while walking to my bike and I’ve found water dripping out a couple of times because the rubber flap wasn’t properly pressed into place.

How well does it work?

The device uses a fan that sucks air in through a removable/replaceable dust filter in the front that doubles up as a wicking pad to soak in the water. There’s also a small reservoir lock at the bottom that you need to open to start the flow of the water. BluArmor says it included this feature because there is a chance that water spillage can happen if the helmet is held in a partially or fully upturned position.

The BluSnap works well in the right environment. It sends a gentle stream of cool air which keeps you comfortable enough to not need to open the visor, even at a complete standstill. The company claims a 6-15-degree temperature-drop inside the helmet, based on the city you're in. The large difference is because the evaporative cooling phenomenon works better in dry heat. So the device will work better in cities like Delhi, rather than in humid places like Mumbai.

What I like about it equally (if not more so) is the air-filtering function. It is worth mentioning that this is not a PM 2.5 air filter, so it won’t serve as well as a pollution mask. It still does a good job of filtering a lot of the dust out of the air. In a city like Mumbai, with relentless roadwork and metro construction, this proves valuable; and my filter started to show dirt stains within two weeks of use. The fan itself is silent enough that the sound is lost in the din of traffic – and I can hear the radiator of my KTM 390 Duke over the BluSnap, so there’s no concern of it getting either intrusive or annoying.

Ultimately, it is an unusual feeling, having a cool draft of air on your face when you’re stuck in a traffic snarl and the rest of your body is uncomfortably hot and sweaty. While it is in no way a complete escape from the heat (that would involve a closed-off environment and an air-conditioner – or in other words, a car!), it undeniably brings some relief.

Beyond the obvious weight-addition, we’d also like to see a more compact version of the BluSnap in future iterations, as well as a water-level indicator. BluArmor says that the components in the device are designed to be water-resistant and that it can withstand a light or medium shower; but regular use during the monsoons is at the user’s discretion.

There’s also the safety aspect to discuss and having something external on any helmet is inadvisable – this applies to action cameras too. BluArmor says they’ve crash tested the cooler and it is designed to break apart under impact and let the helmet do its job. Still, this is a product we’d only recommend for those who deal with crawling, bumper-to-bumper traffic on a daily basis. Besides which, natural airflow is sufficient at higher speeds.

Helmet AC for almost a week now. Here's my take on this innovation How does it work?

These guys have truly managed to simplify the entire thing.
You just need to pour chilled water on the left side of the unit and press the power button on top right. There's a small fan inside the unit that starts rotating when switched on. The cold air is then released from 2 nozzles which go inside the helmet.

BLUSNAP – HOW BIKERS CAN KEEP A COOL HEAD THIS SUMMER All ye riders and motorcyclists, lend me your ears!

Summer is here and by the likes of it, it’s gearing up to be a scorchingly unbearable one. So what I’m gonna do is slap-on my ventilated riding gear – Mesh Jackets, Mesh Pants and Mesh Summer Gloves and my BluSnap to beat this heat and hit the road 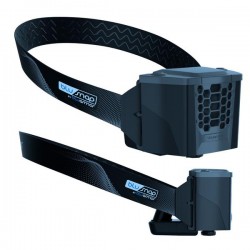