When Team ZX1 (called BRB International in those days) first started manufacturing in 1992/93 we didn’t have many customers although we knew we had a good product that produced great results.

We had a few contacts in the Motorsport Industry and basically we prepared blends that we gave to some of these teams, they performed their own tests, Dyno reports etc and generally monitored how their engines and gearboxes etc performed.

We collated all this feedback and advice and developed the EXTRALUBE ZX1 that we know today.Through the years we have been proud to associated with some very high profile teams who ran our EXTRALUBE ZX1 in exchange for displaying our logo.... how times have changed!.

Ivan’s engineer Chris Carter had been trialling EXTRALUBE ZX1 in various pieces of equipment but not yet on his car and as they didn’t have a spare they repaired the Pump Shaft, added some EXTRALUBE ZX1 and the Pump ran long enough to get the ZX1 to the internals of the Gearbox.  Ivan ran another 39 laps without any lubrication to the gearbox and won the race!.

It is often confused with "Oil Additives for engines", when, in fact EXTRALUBE ZX1 Micro Oil  is a Metal Treatment therefore different to other engine treatments available on the market today.

It does not contain particulates such as Teflon or P.T.F.E. Molybdenum or Zinc Dialkyldithiophosphate (as quoted by honest john) a common cause of blocked filters and airways has a toxisty level between milk and garden soil and it is not copper corrosive.

EXTRALUBE ZX1 Micro Oil Metal Treatment does not change the properties of the oil, or other native lubricant, but chemically bonds to the metal surfaces, modifying the friction surfaces of the metal. It allows the oil  (Team ZX1 do not wish to rubbish the oil currently being used, as it needs this oil) to do its job even better and the significant benefits result in:-

EXTRALUBE ZX1 Micro Oil Metal Treatment can be used in engines, gearboxes ( manual and automatic) and fuel tanks.  It has been tested by the most rigorous testing procedures using standard industrial tests that are the benchmark of friction and wear lubrication performance worldwide such as the Falex Test, Four Ball Test, Timken Test and a variety of others. Performed by: The Atomic Energy Authority, the National Centre of Tribology, Inchape Testing Services and Caleb Bret.

All ZX1 products carry a N.A.T.O. stock number (Nato Manufacturing code U8809) and ZX1 in only a 5% ratio added to an engine oil out-performed all other lubricants by a big margin and is certainly far more flexible than other lubricants available today.  EXTRALUBE ZX1 Micro Oil Metal Treatment has also been proven in the field by motor racing teams, rally teams, bike racing teams, the commercial, offshore drilling and marine sectors. 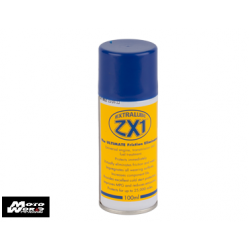